You know the feeling. You hit a bad shot. It feels terrible. Then your bright golf buddy says oh you have sliced again! You fill in the gap. It will be a golfing term which perhaps you have never heard of! And that makes you feel even worse. You seem to mis-hit the ball all the time. And now you are being told you know nothing about the game anyway!

There is nothing worse than not knowing the in-terms in any game. And there are more of these in golf than in most sports.

If you feel a bit lost, we share your pain. And we are going to help you out here. We are bringing you our definitive guide to golf shot terms. You may still miss some shots when you are out on the course, but at least you will know what that annoying partner means when he shouts, “You chunked it, Pal.” (And you can be pretty sure that he is going to hit it fat before you get back to the clubhouse).

The main types of shots you will be using

Before we go on to a list of terms, it is helpful to break the game of golf down into the primary type of shots.

The first is the drive. The drive is the shot which is about distance. It will be the first shot you take off the tee. But you will also use drive shots on the fairway where you need to move the ball as far as possible.

A good amateur golfer might expect to drive the ball two hundred and fifty yards from the tee. Drive shots are not just about strength and power. They are also about technique. To drive well, you need a well-controlled golf swing. Developing your swing takes practice so get out there on that driving range.

After your drive, you will be playing approach shots. These are the shots you need to get the ball from the fairway onto the green and nearer that all-important hole.

Next up are the putting shots. These are the short distance shots, where the ball rolls along the ground towards (and hopefully into) the hole. Perfect accuracy, control of speed and nerve are necessary if you want to become a great putter.

Shots to get you out of trouble

The above shots are all you will need is everything goes perfectly. But of course, it doesn’t. You will also need the shots which will get you out of trouble.

Next is the lay-up. Here you aim to avoid trouble. For example, you may decide to take a shorter shot on the fairway to avoid going into the water and incurring a penalty. It will mean you make one more shot, but you might decide that is better than getting stuck in a hazard.

If you do get stuck in a bunker, then you will need a chip shot. A chip shot is not a full swing but will get the ball in the air, beyond the hazard and you’re back in the game.

Golf course designers put hazards on the course to make things interesting. If you spot over-hanging trees, for example, you may want a punch shot.  As well as hazards on the course, there is always the challenge of the weather. If you are golfing into the wind, you might also use a punch shot, which is designed to keep the ball close to the ground.

There may be hazards overhead, but there will undoubtedly be hazards on the ground which you are going to need to get over. Here you will need a flop shot, pushing the ball high into the air and sending it sailing over those objects.

Now we have run through the basic shots, let’s have a look at more golfing terms.

When the edge of your club hits the ball, rather than the sweet spot.  If you do this, your ball will not rise as it should, and you will lose distance.

If you are right-handed, this is hitting a ball to the right (if you are left-handed it is when you hit it to the left)

This shot is a nasty one. You have aimed for the ball, but your club has dug into the ground. Everyone does this sometimes and here is some good advice to stop doing it.

Another term for a fade

Not as bad as a hook, but the ball is still going right to the left and not where you want it.

When you mis-hit, and the ball ends up doing the exact opposite of what you intended. Take a deep breath, get your golfing mind in place, and look to the next shot.

Same as a double tap

A double tap is when your clubhead strikes the ball twice. It often happens on chip shots. You will get one penalty stroke for a double tap. On top of that, the ball is unlikely to travel far.

A hook shot which keeps low and doesn’t go very far. It means you are getting nowhere fast.

Fade – This is less bad than a slice, but still pretty bad. If you are a righty, the ball is sailing from left to right.

This one can be good. It’s where you use a wedge club and open the face, so the ball flies high in the air. Then it lands softly on the ground. Watch Phil Mickelson show you how

Oh dear, it was going so well, and now the ball is in the bunker. More than that it is half buried in the sand, looking just like a fried egg.

Hook – Another one where lack of control on your swing causes problems. The ball will be veering wildly from right to left (if you are a right-handed player).

Another term for chunking. If you hit the ball fat, the ball will not go as far as you want.

You will have seen this on TV. Even the best tour professionals do this sometimes. It is when you putt, and the ball rolls around the edge of the cup and veers off in a direction you do not want it to go. So near and yet so far. Watch others suffer here

Overclub is where you select a club which will hit the ball further than the target. Sometimes it is a mistake. But just sometimes, you might choose to do it, for example, if you are playing into the wind.

Situations where you are allowed to improve the lie before you play the shot.

If you are playing it down, you have to hit your shot no matter how hard the lie is.

Pull – The shot has gone left.

This a bad one. It is when you hit the ball with the hosel (that is where the shaft of the club joins the club head) rather than the club head itself.

The clue is in the name with this one. The ball is struck with the very top of the club face and so shoots up in the air. It looks spectacular but will not do you much good. The energy is going upwards rather than going forward, so you’re not gaining the distance you need.

Slice is all to do with your golf swing. If you do not control your swing well, then you can put too much curve on the ball. If you are right-handed, the ball wizzes from left to right, way away from where you want. Here are some tips to stop you from slicing the ball

Some golfers like to use a putter on the fairway, rough or even in a bunker. This is what we mean

A thin shot is the same as a blade shot

When the toe of the clubface, rather than the sweet spot, make contact with the ball. If you toe the ball, it won’t go far, and you are going to need more shots to hole the ball.

A thin or blade shot but even worse. It is when the club head strikes the top half of the ball. It is an awkward shot. The ball will often make little hops before coming to a stop somewhere you don’t want it to be.

The opposite of over clubbing. You take a club which will send the ball a shorter distance than your target. It might be that you are not skilled enough in selecting the right club yet. But you can do it on purpose, for example, if you have a stiff breeze behind you.

Oh, dear, this is the decidedly worse. It’s when you take a perfect swing, and you miss the ball entirely. It gets its name from that hateful whistle your club makes when it goes right through an arc and touches nothing. And to add to the pain, the golf rules say you must treat it as a full shot. Even though you did not touch the ball, you will still suffer!

This shot is another embarrassing one. You want the ball to go in a lovely arc and travel down the fairway, but it just rolls along the ground.

There is a whole bunch of special terms which describe how many shots it takes to get the ball into the hole.

To understand these, we first need to clarify another term. We need to know what ‘par’ means.

Above or below par

Now we are clear about par we can move onto the strokes. The names describe how they relate to par. How much above or below par each golfer takes to get the ball into the hole.

From the best to the worst. Using the correct terms for hole scores.

One Stroke Under Par

One Stroke Over Par

We hope you will never need to go higher than Bogey 5. But we feel we must tell you about the snowman. The snowman is a score of more than eight shots on a hole. Don’t worry. We have all been there.

Now you have the lingo of golf shot terms


We hope you feel more confident now you know the most popular terms used for golf shots, both good and bad.

We want to finish off this article with some words of encouragement. Golf is a great game, and it is a tough game. Even the most celebrated players have off days and make quite spectacular mistakes. The greatest skill you can learn as you develop your golfing game is mental resilience. Work on your mental game as well as on your physical game. Develop techniques and habits which mean when you make a terrible shot you do not dwell on it. 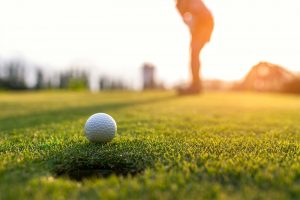 Welcome to Golfing Pursuits, where we’re here to help you get the most out of your game.